Did It Hurt? When You Fell From Kentucky?

Pour a couple fingers of whiskey and try this on for size. What’s the most treacherous topic to tread the web?

Hint: it’s not that black and blue dress (nor is it the white and gold one, if that even exists). Sure, the tried-and-true taboos of politics and religion are as good as ever for evoking rage on social media, but if you really want to get the ol’ forehead veins popping, say something — anything at all — about bourbon.

Hyperbole aside, we were alarmed to find such hostility in a subculture founded upon the consumption of a delicious, distilled drink. Our real-world experiences with the bourbon community have been pleasant, leading us to believe that the majority of people, by contrast, are too busy enjoying bourbon in good company to play with pitchforks and torches. Bourbon-lovers all around the country have overwhelmed our Kansas distillery with support, encouragement, and even some awards. From a glance at the comment sections on our Facebook ads, however, one would assume bourbon drinkers are some of the most mean-spirited, fragile egos money can buy.

For every friendly instance of show-and-tell online, there sneers a more sinister bourbon-drinker, eager to turn their empty bottle of Blanton’s into a molotov cocktail. 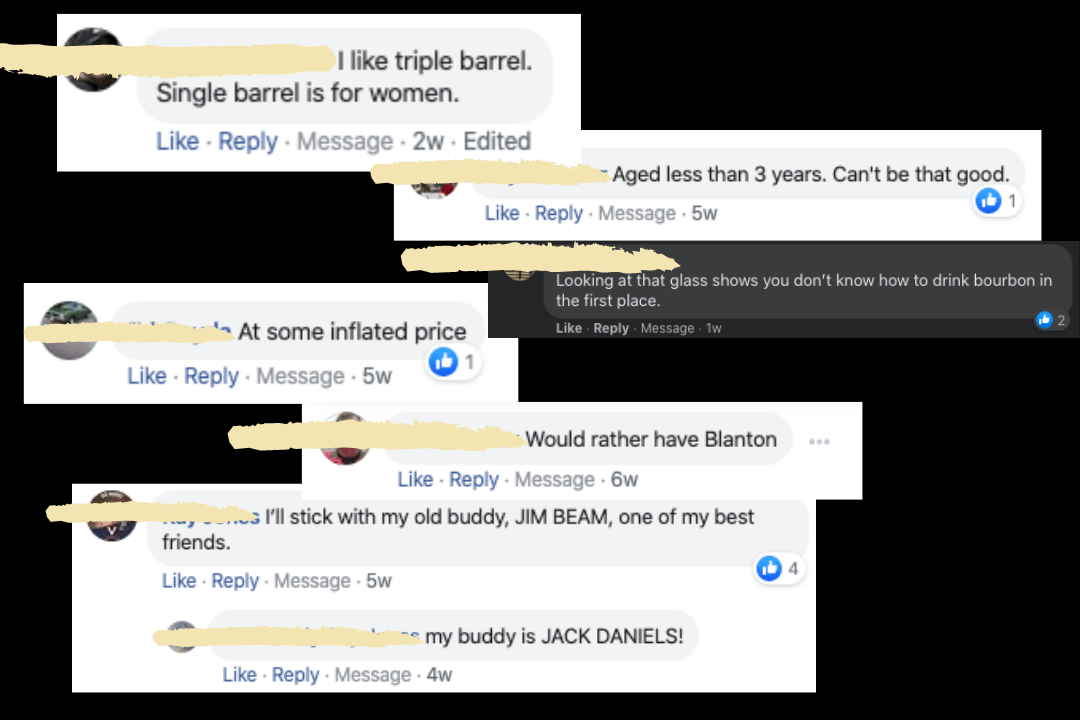 From this luxurious hive of bourbon snobs, one archetype stands out in particular. He or she peddles misinformation so enthusiastically, with so much condescending tenacity, that it becomes unintentionally hilarious: 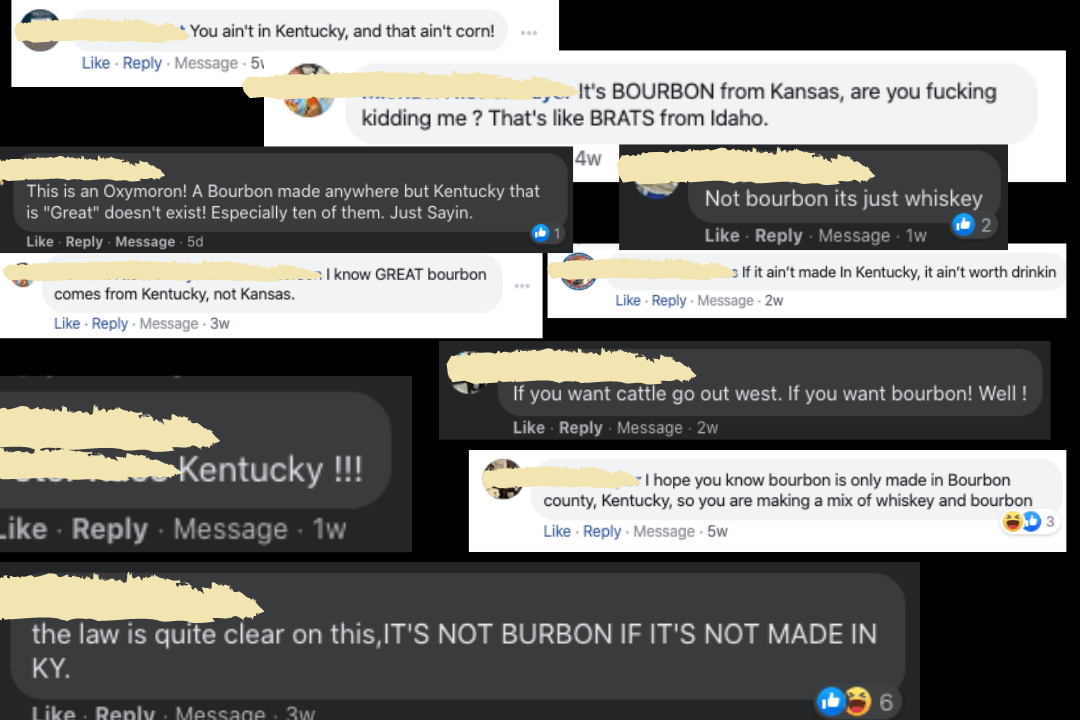 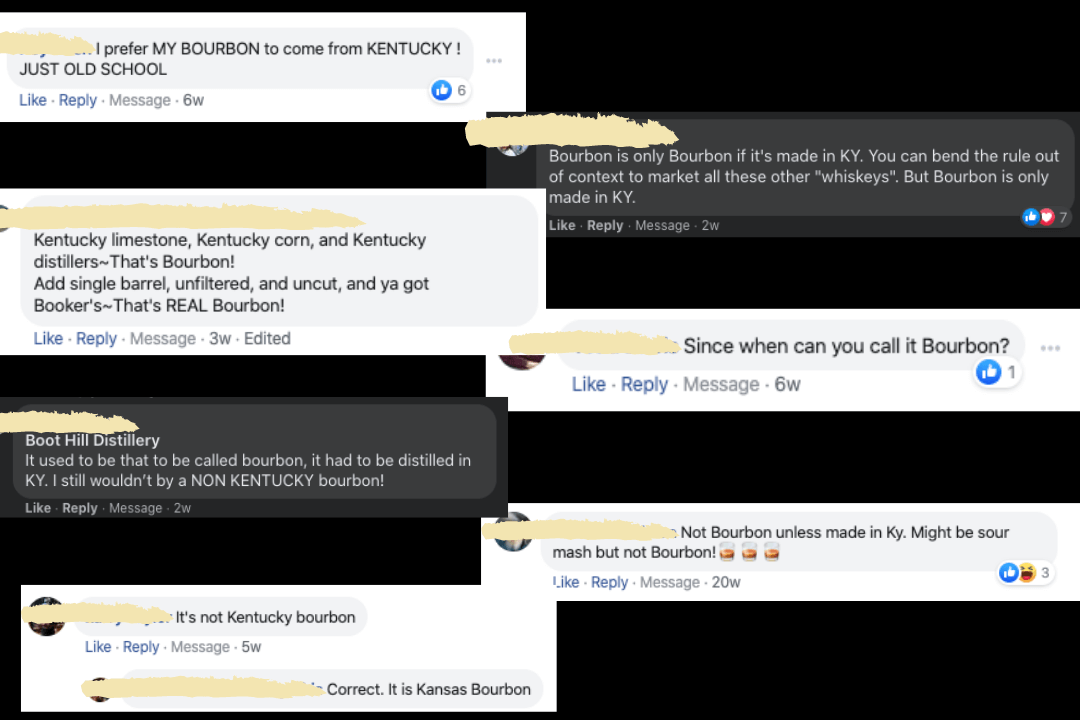 Ah, yes; the old Kentucky-only crowd. At the risk of getting a banjo smashed over our heads, we wanted to uncork a phenomenon near and dear to our hearts (and our livers). On this, the anniversary of Congress declaring bourbon a product of the United States, giving it the full protection of the law in 1964, we want to ask why this misconception continues to circulate today.

Bourbon in the Books

We are not here to argue whether or not Bourbon can be made outside of Kentucky. The requirements for Bourbon are not mysterious at all; they are spelled out in meticulous detail in the Standards of Identity for Distilled Spirits provided by the Alcohol and Tobacco Tax and Trade Bureau (TTB) of the United States Department of the Treasury. One would have an easier time debating the ontology of a spoon. 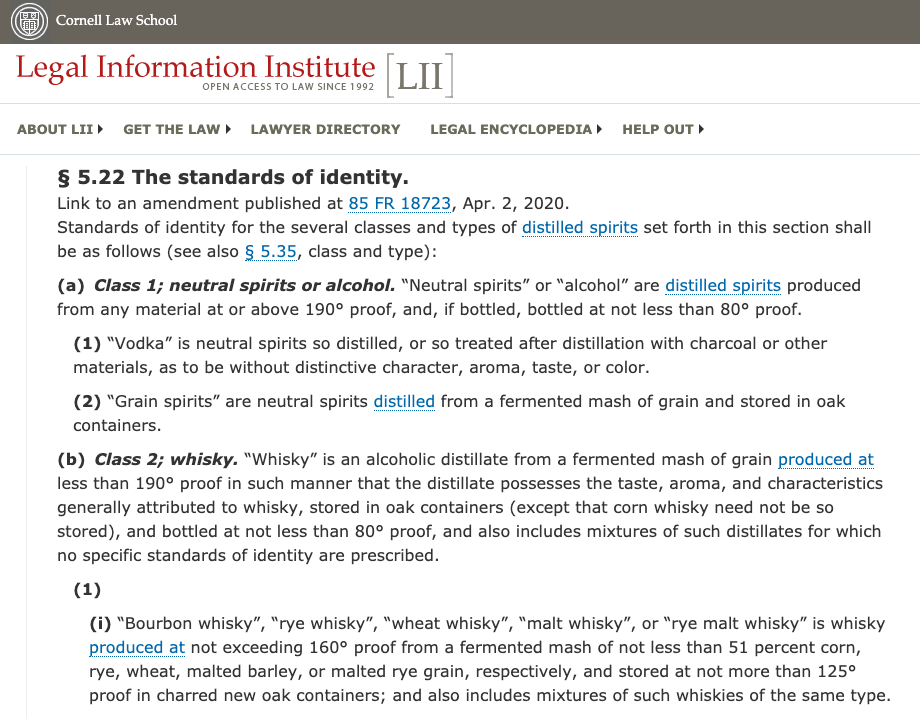 The production of Bourbon is more strictly regulated than Scottish Single Malt Whiskey, “where the rules governing whisky production are, quite rightly, stricter than almost anywhere else,” and yet no requirement exists that it be made in the bluegrass state (Michael Jackson and Dominic Roskrow, Whiskey: The Definitive World Guide). While the majority of the world’s bourbon is still made in Kentucky, it is being produced legally from all over the United States — to outstanding effect.

Why, then, does this myth rear two new heads like some inebriated Hydra with each decapitation? Why do so many well-intentioned (and a few downright insufferable) folks insist on swinging their supposed bourbon-wisdom around as though it were the very revelation of God?

For starters, most of the world’s bourbon does come from Kentucky. It always has. While the details of its origins remain unclear, Bourbon’s roots run deep with the farmer-distillers of the early 19th century. They figured out how to use charred-oak barrels for the aging of whiskey in the same way that the French had appropriated the technique to flavor and color brandy and cognac in the 15th century.

Kentucky, as it turns out, “was a natural home for the manufacture of whiskey in that it has limestone-filtered water free of iron deposits, which can taint the flavor of whiskey. But it was especially suited to the manufacture of bourbon whiskey: its hot summers built up pressure in the barrels, allowing the fermenting liquid to enter the charred wood, and its cold winters reversed the process . . . The state was also advantageously located in that the early distillers had easy access to the river systems that were key to the marketing of their product.” See Kentucky Bourbon Whiskey by bourbon historian Michael R. Veach (Chapter 2, “The Origin of Bourbon Whiskey").

The same conditions that allowed Kentucky to thrive as a bourbon producer exist in similar configurations around the country today, and the market is starting to take notice. Intense climate swings have allowed distilleries in places like Kansas, Texas, and Colorado to age their bourbons in a shorter amount of time, imparting the same intense flavors typified by older whiskeys. Various sources of water, whether from Rocky Mountain snowmelt or Wyoming’s limestone aquifers, have given a sense of terroir to spirits that otherwise follow identical methods of production.

Perhaps the “Kentucky-only” error owes its widespread adoption to the perfectly commendable desire to protect the integrity of bourbon over time. As hundreds of new craft distilleries open each year, the question of quality remains paramount. As the market “becomes more crowded, individuals look for unique points of difference. There is a danger that they will, at best, dilute what we know as whiskey and, at worst, break well-defined and traditional rules that are made not as a barrier to entry or to restrict practice, but to ensure the drink we know as whiskey meets certain quality standards” (Roskrow, 13).

As the wave of craft spirits begins to crest, we have a responsibility to balance passion with tradition and the standards that bourbon whiskey lovers have come to rely upon. Our very existence is a nod to the seas Kentucky has already charted as the grandfather of bourbon. Do not mistake us for rebellious teenage runaways, shoving off without map or compass into choppy waters and abandoning bourbon’s rich heritage. Rather, we forge ahead to create the finest bourbon possible right here in Dodge City, Kansas. We choose to enjoy this beverage in the most time-honored place of all — our mouths.

For the bourbon fanatic, this is not a zero-sum game. To deny oneself the best that bourbon has to offer because of some cockeyed insistence on brand loyalty or locale is a pitiful loss that only leads to one outcome: more bourbon for the rest of us.

"TTB Standards of Identity for Whiskey in Plain English" by Josh Peters, The Whiskey Jug
https://thewhiskeyjug.com/whiskey/ttb-standards-of-identity-for-whiskey-in-plain-english/

"Is It Still Bourbon If It's Not Made In Kentucky?" by Maggie Kimberl, The Whiskey Wash
https://thewhiskeywash.com/whiskey-styles/bourbon/still-bourbon-not-made-kentucky/