The Search for Prickly Ash Bitters

How Boot Hill Distillery traced down an original Old West bitters recipe and brought it back to life.

By Mark A. Vierthaler

Prickly Ash Bitters began its life as many patent medicines of the 1800s did - with questionable claims of medicinal benefit, and unquestionable intoxicating effects.

Advertisements at the time touted the elixir’s supposed miraculous qualities. If the salesmen across the old west towns were to be believed, Prickly Ash could cure “dyspepsia, constipation, jaundice, sick headaches, and bilious complaints.” 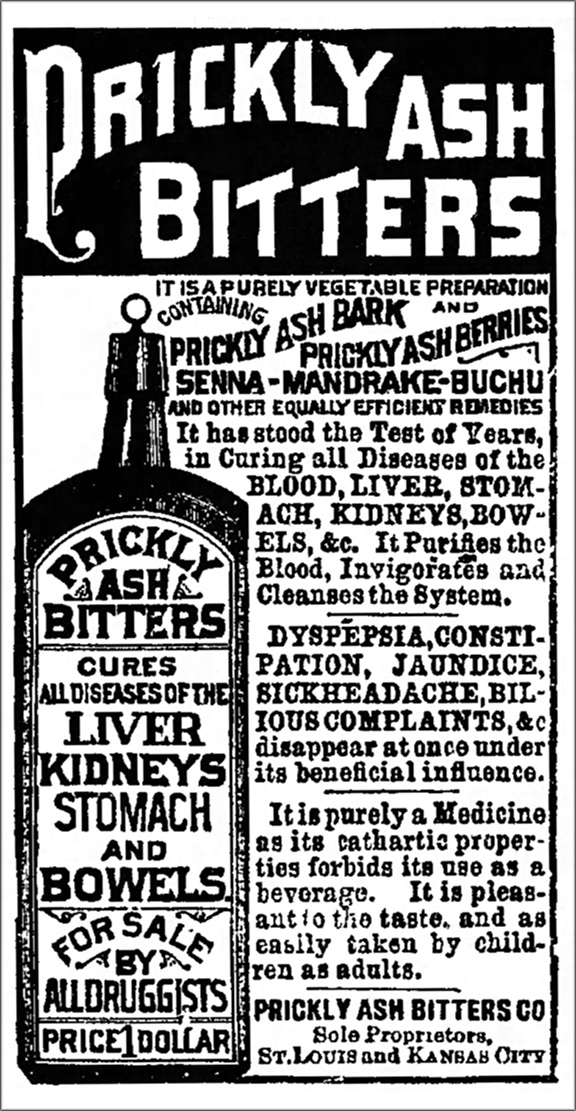 And naturally, there’s no way it could ever be considered intoxicating, as its “cathartic properties forbids its use as a beverage.”

That it happened to have 20-25 percent alcohol by volume and was popular among the cowboys ready to rest their weary backs on the cattle trail? Certainly, that was all just coincidental.

Like many Old West bitters, they eventually became extinct thanks to rigorous enforcement of the Pure Food and Drug Act of 1906. Prickly Ash Bitters breathed its last ignominious breath in the late 1910s after it was found (multiple times) that while a tasty alcoholic beverage, it offered little to no medicinal benefit.

It’s perhaps one of the most striking images of the rowdy early days of Dodge City. During those years, when we were known as the Beautiful, Bibulous Babylon of the Frontier.

An austere brick building sits in front of a line of wooden frame shops that recede into the distance. The road in front of the shops is nothing but dirt and mud. Shadows of locals line the wooden boardwalk. A stagecoach sits hitched in front of the Longbranch Saloon – one of the Old West’s most infamous bars.

Unceremoniously plunked in the middle of the street is a ramshackle well that props up two hand painted signs. The one on the top: “The carrying of firearms is strictly forbidden.” Below that: “Try Prickly Ash Bitters.” Google “Prickly Ash Bitters” and among the classic advertisements and occasional (empty) bottles that pop up for sale, you will find the image of Dodge City’s Front Street. It’s the same image that served as the basis for the current layout for Boot Hill Museum, just down the hill from us here at the distillery.

It’s this same association with Dodge City that has led countless tourists from across the globe to ask the museum if they sell Prickly Ash Bitters. Alas, the museum never had, as the so-called “curative” had been dead and moldering in its grave for almost a century.

Prickly Ash Bitters – like countless other patent medicines from the wild and wooly days of the 1800s – could have easily been destined for the dustbin of medical/cocktail history if not for the famous photo and Boot Hill Museum’s decision to feature the sign so prominently.

Naturally, the first step was tracking down the history of Prickly Ash Bitters, how it came to be, how it disappeared, and who exactly was Dr. B.F. Sherman. 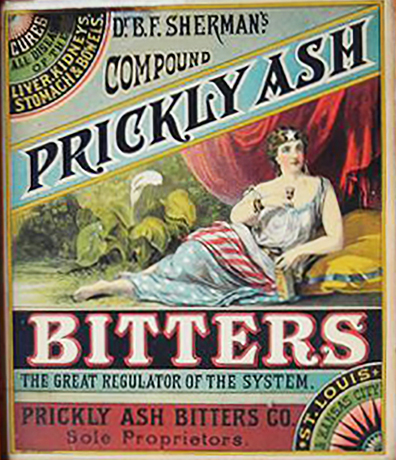 Dr. Sherman was the sole proprietor of Prickly Ash Bitters located in St. Louis, although there is little to no information on his company during that time. Prickly Ash Bitters was eventually purchased by the Meyer’s Drug Company around 1883, who would continue to produce the bitters under the Prickly Ash Bitters Company label until shuttering the business in the late 1910s.

WHAT'S IN A CURE-ALL

Once we could track down the history of the company, we began digging deeper into what ingredients were actually used for Prickly Ash Bitters.

Interestingly enough, it was the judgements against Prickly Ash Bitters for their unsubstantiated medical claims under the Pure Food and Drug Act that gave us some of our biggest insight into the ingredients used, alcohol proof, etc. Also included in our resources was the wonderfully named Nostrums and Quackery: Articles on the Nostrum Evil, Quackery and Allied Matters Affecting the Public Health Vol. 2, published by the American Medical Association in 1921.

If you look at the list of supposed health benefits, they're all pretty spurious.

It was actually these health claims that caused the downfall of the bitters. After the passing of the Pure Food and Drug Act, the producers of Prickly Ash were required to prove their medicinal claims versus it simply being used as an alcohol beverage. Alas, they couldn't prove that, so it went the way of the Dodo.

We built our current recipe off of these government reports, published recipes, several druggist manuals, and similar sources. The challenge became one of creating a delicious amaro that was suitable for consumption. Meaning, there were a handful of botanicals in the original mixture that are now no longer considered safe for human consumption.

In particular, we had to find suitable replacements for Button Snakeroot, Wild Yam Root, and American Mandrake (aka Mayapple Root), as those do not appear anywhere on the FDA Generally Regarded as Safe or Everything Added to Food in the United States lists.

We took it upon ourselves to make tinctures with these ingredients and then consumed them (ourselves alone) to get an idea on flavor profile so we wouldn’t have to submit them to the FDA for approval specifically for our product. After a fair amount of experimentation, we were able to find three replacement ingredients that appear on the GRAS and EAFUS that offered nearly identical flavor profiles to the original ingredients.

Our end result is a formula that is fully approved by the government and tastes as identical to the original recipe as we can ascertain.

Featuring such unique botanicals as prickly ash bark, buchu leaves, senna, coriander, grains of paradise and cubeb peppers - Prickly Ash Bitters' unique character and powerful burst of flavor is sure to spice up coffee, beef up a spritzer, or is wonderful simply added to your favorite dry sparkling white wine.

As a quick Post Script – we were curious what ever became of Dr. B.F. Sherman after he sold his lone claim to fame.

After some digging, we discovered that, according to the Meyer Brothers Druggist Volume 22 – our friend Dr. Sherman met with a somewhat inglorious end.

“Our information is that Dr. Sherman died at Chillicothe, Mo., or some small town in that vicinity. It appears that Dr. Sherman went into a drug store to get a drink of whiskey, and being familiar with the place went behind the prescription case and helped himself, but by mistake took from the wrong bottle something of poisonous nature from which he died in a few hours.”